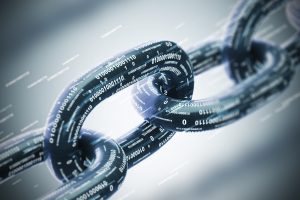 As the blockchain avalanche continues, and ever-increasing numbers of blockchain-based patent applications seek issuance, savvy inventors and practitioners continue probing for patent-eligible space. Blockchain apps ultimately will face the same barriers as other software applications—key among them being new rules on subject matter eligibility. For those hoping to make it past such obstacles, performance-related refinements to blockchain technology may provide a safe harbor.

Forks and Sidechains
The most common blockchain implementations are open source, and modifications to the software are encouraged. Modifications can be either compatible or incompatible with the original blockchain implementation. In some of the more common applications, a blockchain’s policy rules can be altered without affecting compatibility, while consensus rules must be maintained to remain compatible. For example, a policy rule may dictate that each financial transaction is above a certain amount, while a consensus rule may require adherence to a particular data protocol, voting mechanism, or form of log replication. Modifying the open source code to create a customized blockchain is called “forking” the software, which should not be confused with forks of the blockchain itself (i.e., splits in the shared ledger). (For clarity, one may fork the blockchain code with or without forking the blockchain.)

By now, most people know about Satoshi Nakamoto’s blockchain solution—even if not everyone understands the particulars—but fewer know of some of the newer iterations, such as the pegged sidechain. First introduced in the 2014 white paper by Blockstream, pegged sidechains enable asset transferability from one blockchain to another (e.g., between multiple blockchains of ledger assets like bitcoin). The sidechain white paper discloses limitations on replacing assets back to the main blockchain, protocol for preventing malicious party interference and/or prevention of asset transfer execution, and protocol for preventing a sidechain from affecting other linked blockchains. Pegged sidechains could facilitate increased process advantages not only in security but also in storage, among other applications. For example, by increasing the block size of the sidechain, one could increase transactions per unit of time. Forking in this manner may provide process advantages encompassing the functionality of the blockchain.

This especially could come into play in art units where DDR Holdings LLC v. Hotels.com, 773 F. 3d 124 (Fed. Cir. 2014) seems to often carry the day, as with Technology Center 3600, which handles patent applications in the arenas of transportation, electronic commerce, construction and agriculture. Such technology could alter policy and consensus rules (i.e., forking) and provide process advantages, which may bode well in patent eligibility. Let’s briefly examine one interesting approach using sidechains: the forked slidechain.

The Forked Slidechain
One recent patent discloses a system and method for creating a multi-branched blockchain with configurable protocol rules. The patent discloses a so-called “slidechain” blockchain allowing multiple branches (i.e., a sidechain) to propagate simultaneously with the custom protocol rules in each forked chain that branches from another chain. Here, we see an example of creating forks by forking. In prosecution, the initial claims lacked express recitations of much of the slidechain functionality. In order to overcome the 101 rejection issued by the USPTO, and relying on the process advantages of the slidechain, Applicant amended their independent claims reciting, in pertinent part, “generating a blockchain comprising linked data blocks, said blockchain being configured to propagate one or more branching blockchains, wherein any existing branching blockchain is configured to propagate one or more additional branching blockchains, where each of said branching blockchains has a fork block from which said one or more branching blockchains can grow in multiple directions thereby forming a multidimensional database known as a slidechain.” Arguing that their slidechain “improves upon the way data is stored, data security, data integrity, and generally creates a resilient, reliable distributed database that can be accessed from any node in the system,” Applicant’s reliance on forking process advantages and forked slidechains carried the day.

All that may sound arcane, but such solutions have practical applications that are easier to appreciate. Take the patent that disclosed a system and method for securely receiving and counting votes in an election by adapting blockchain technology for the storage of voting data in an electronic voting system. Even the most established technophobe can appreciate the role such technology could play in making the voting process more secure. In the initial 101 rejection, the examiner highlighted that the claims are essentially directed to the storage of voting data in an electronic voting system via the use of blockchain technology. The examiner reduced Applicant’s claims down to merely using categories to organize, store, and transmit information, and data recognition and storage. Upon Applicant’s addition of “a fork block of a slidechain” and corresponding arguments similar to the previously discussed patent, the examiner issued the notice of allowance.

Inventors and practitioners seeking to gain protection for their blockchain-related application may do well to explore the applicability of sidechains in their solution. Although not everyone is convinced of the integrity of the sidechain (some argue that certain types of sidechain may have security weaknesses), hanging your eligibility hat on a sidechain may not be the worst approach. While snapping on a few sidechains to your blockchain app may not always be enough to clear all 101 hurdles, this is one fork in the road to patent acceptance that forward-thinking inventors and practitioners may want to consider.