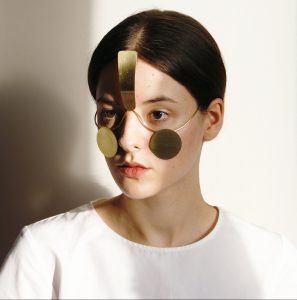 A sponsored post popped up on my Instagram last week that captured my obsession with statement jewelry and my periodic check on developments in facial recognition technology: “Artist Designs Metal Jewelry to Block Facial Recognition Software from Tracking You”. Statement jewelry? Check. An indication of how stressed out people are by facial recognition technology? I think so. While an experimental project, it’s not a far stretch to imagine the design actually being sold and purchased.

As the article explains, the artist’s design, called “Incognito,” actually works: the artist, Ewa Nowak, writes on her website she based her design on how an actual social media facial recognition algorithm tracks faces. In another article, Nowak explained that she was inspired by the light-up glasses invented by Japan’s Institute of Informatics back in 2013 to block facial recognition technology. Those glasses used near-infrared lighting, which is invisible to the human eye but is picked up by cameras, to block the area around the eyes.

We’ll continue to monitor developments in laws targeting facial recognition and how existing laws and proposals either banning or regulating the tech play out. In the meantime, consider some face jewelry to hide those stress wrinkles.