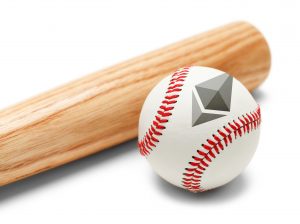 With the World Series upon us, here in Los Angeles, all eyes are on the Dodgers, who are in the hunt for their first championship trophy since 1988, a year best remembered for its epic mustaches and Kirk Gibson’s cinematic, two-out, walk-off home run. What may have gotten lost in the excitement, though, is a unique Dodgers fan giveaway that might also be remembered years from now.

A quick refresher is probably in order.

Cryptocurrencies like bitcoin allow users to send virtual currency to one another using matched pairs of code words called “public addresses” and “private keys.” A public address is similar to an email address; it is meant to be shared publicly, so its owner can receive some bitcoin. A private key is similar to an account password; it needs to be kept secret. Anyone who knows your private key can spend your bitcoin (or read your email).

For example, I send you some bitcoin to your public address. When you want to spend it, you use your private key to authorize sending it to someone else, like a merchant or your friend, at their public address. Every public address comes with its own unique private key. Our bitcoin transaction is permanently stored for all to see on the blockchain, the unchangeable public ledger that is secured by powerful math. Special applications called “wallets” manage all of this for you.

Now, back to the Dodgers.

On September 21, 2018, the Dodgers held the first-ever Digital Bobblehead Night. Instead of receiving posters or rally towels, fans arriving at the game that night received what looks like a Dodgers gift card. On the back of each card are two important features: a long string of letters and numbers making up a public address, and a silver scratch-off area hiding the top secret private key. The public address on each card is pre-loaded not with some amount of a cryptocurrency, but with a digital token on the Ethereum blockchain.

Or maybe you are wondering why you should care. You don’t even own any physical bobbleheads, and you don’t watch baseball.

But here’s the thing. Tokenization doesn’t end with Dodgers bobbleheads. In fact, they are just the latest virtual asset to be owned and traded on the blockchain. In late 2017, the popularity of CryptoKitties, a game where owners trade and breed cute digital cats, almost ground the Ethereum blockchain to a halt. Both the bobbleheads and the kitties are successful examples of tracking assets on the blockchain: ownership and provenance can be cryptographically proven; they can be securely and freely bought, sold, traded or given away; and because this takes place on the blockchain’s permanent ledger, the records cannot be altered or forged.

The current push is for the tokenization not just of virtual assets, but also of real-world, tangible assets. We recently covered the new California law that will facilitate issuing and storing stock certificates on the blockchain for some corporations. Last month, it was reported that Walmart will be using the blockchain to track produce shipments in an effort to cut costs and respond more quickly to food safety issues, such as E. coli outbreaks. Two weeks ago, it was reported that a $30 million Manhattan luxury condo project would be tokenized on the Ethereum blockchain in a form of a Reg D offering. Each of these is an example of a real-world asset being represented on the blockchain to increase speed, efficiency, transparency, and security. (Just like the Justin Turner digital bobblehead I sold you earlier.)

So the next time somebody asks you if you know about the latest trend in tokenization of real-world assets onto the blockchain, just bob your head up and down pleasantly and say, “Of course I do.”