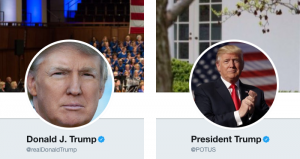 Recently, however, the President has been under fire for what he chooses not to share with the masses—specifically, who he chooses to block from his account. Author Stephen King was the latest addition to a group of Twitter users who have been blocked from the President’s @realDonaldTrump account, allegedly for criticizing, mocking or disagreeing with his actions.

The Knight First Amendment Institute is representing two blocked users who are asking that President Trump or his aides unblock them from @realDonaldTrump. In a letter sent to the President, the Knight Institute argues that Trump’s Twitter accounts—both @POTUS and @realDonaldTrump—are “designated public forums” under the First Amendment, meaning that Trump uses these accounts in his capacity as President to convey official statements and engage with his constituents. In this way, the Twitter accounts function like a town hall meeting where attendees cannot be excluded based on their views under the First Amendment. Therefore, according to the Knight Institute, President Trump is violating the First Amendment by blocking users based on the content of their tweets.

Not everyone agrees with this interpretation of the President’s Twitter accounts. The Knight Institute recently addressed a number of objections to their letter, including the fact that blocked users can still view the President’s tweets simply by logging out of their account or creating a new account entirely. But are these constitutionally adequate alternatives? While many argue that these are easy solutions, the Knight Institute notes that these substitutions could deprive both the blocked user as well as the other constituents from engaging in a full debate. For instance, if a user creates a new account to engage in conversation, she would be communicating with the President and his followers in disguise under a different account name. Additionally, she would lose the status she maintained in her original account if she doesn’t have her followers to give weight to her comments.

Perhaps the most commonly asserted arguments against the Knight Institute’s stance relate to the conception of @realDonaldTrump as a personal account. Unlike @POTUS, the official Presidential Twitter account that was transferred from President Obama to President Trump when he took office, some argue that @realDonaldTrump cannot be a public forum because he created the account before he became president. However, a federal district court recently allowed a public-forum claim against a county board member to proceed after it was observed that she had been using her personal Facebook page for official purposes. Like the Facebook page in this case, the argument here likely turns not on when the President created the @realDonaldTrump account but on how he uses it now.

As of now, the White House has not responded to requests for comment related to the Knight Institute’s letter or the President’s habit of blocking critics. It remains to be seen whether the Knight Institute will pursue further action if President Trump does not unblock users and, if so, whether courts will consider his accounts to be “designated public forums.” In the meantime, be careful what you say on Twitter. You could be blocked by the President of the United States.