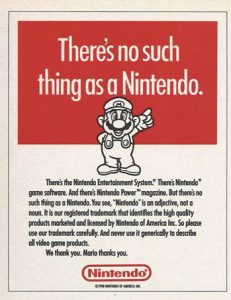 “Baby it’s okay, you can Google my name.” This line from T-Pain’s hit, “Bottlez,” became a focus in a recent Ninth Circuit trademark case on my favorite intellectual property issue: genericide. Among other evidence, the court considered if T-Pain’s use of “Google” showed that the Google trademark had become genericide’s latest victim. Genericide occurs when the public appropriates a trademark and begins using it generically for a type of goods or services, as opposed to a source of goods or services.

Genericide reflects an ironic tension in trademark law. A brand’s trademark can become so successful that it reaches a level of ubiquity that results in the loss of any trademark protection at all. It’s a little like an adult softball league I once played in where, if you hit a home run, you were called out and immediately sent to the dugout instead of scoring a run for your team and running a celebratory lap around the bases.

There are many examples or near examples of genericide. “Aspirin,” “Cellophane,” and “Thermos” are all famous victims—once protected trademarks that are now generic names used by the public to describe the names of those goods instead of their source. I grew up in Texas, and it is relatively well-known that there and in other regions of the country, people will ask “what kind?” after someone asks for a “Coke.” I recently saw a friend there wearing a t-shirt that said, “TEXAS where COKE really means DR PEPPER.” Although the shirt is meant as a joke by Dr Pepper enthusiasts (a thing in Texas), Coca-Cola Co. has found itself in court defending against genericide. When I was a kid (although I had no idea at the time), genericide also threatened Nintendo when people started referring to all game consoles as “Nintendos.” As a more modern example, I often hear people saying that they plan to “Uber” to an event right before firing up their Lyft mobile app.

The Ninth Circuit Google case focused particularly on T-Pain’s (i.e., the public’s) use of Google as a verb, telling someone to “google his name.” However, the Ninth Circuit repeatedly said that verb use does not automatically constitute generic use. Thus while use of a trademark as a verb is not desirable, it does not, by itself, mean that a mark has become generic and unworthy of protection. The court also said that, without knowing more about T-Pain’s “inner thought process,” they could not know whether he meant for the listener to enter his name into the search box at www.google.com or if he generically referred to searching the internet. The court also found that not a single competitor referred to its product as “a google,” a factor that has led to the death of trademarks in the past, such as aspirin.

Perhaps one of the biggest threats to a registered trademark is actually popular culture. The public can latch on to a trademark and start using it to describe every good or service of the same type, especially where a trademark refers to a new or unique type of good or service that was not widely known of before the trademark itself. Therefore, successful businesses must take steps to guard against genericide.
Trademark law requires trademark owners to police their trademarks by taking actions to keep others from misappropriating or misusing them. Businesses themselves should also avoid using their own mark in a generic sense to identify a type of good (and educate their employees accordingly) as opposed to the source because that can also support a finding of genericide. In certain situations, it can also be a good idea for businesses to educate the public on proper usage of their mark as opposed to generic terms. Xerox did this in the past as shown in the ghostly and clever advertisement below: 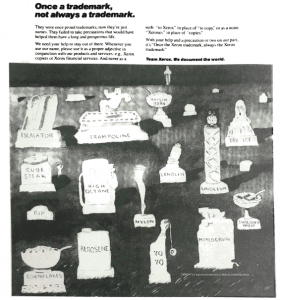 Though Google successfully fought off genericide, it remains an ironic threat to any successful business. So whether a Grammy award-winning rapper uses your trademark in his song lyrics or the public uses your trademark in common parlance, both can threaten to erode your trademark as a source identifier, no matter how much that also reflects the success of your business or product. It’s just too bad that “Baby it’s okay, you can go to www.Google.com and enter my name in the search box” did not have quite the same flow to it.