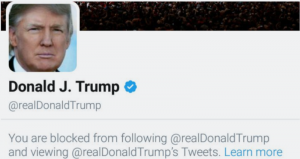 Two years ago, we wrote about a possible First Amendment challenge involving Donald Trump’s practice of blocking certain Twitter users from his @realDonaldTrump account. While it was unclear at the time of our post whether the Knight First Amendment Institute at Columbia University—an organization that uses strategic litigation to preserve the freedoms of speech and the press—would pursue further action, the Knight Institute filed a complaint a few days later in the U.S. District Court for the Southern District of New York against Trump, then-White House Press Secretary Sean Spicer and Daniel Scavino, the White House Director of Social Media and Assistant to the President. On July 9, 2019, the U.S. Court of Appeals for the Second Circuit issued a decision regarding this First Amendment issue.

In upholding the District Court’s earlier grant of summary judgment in favor of the Knight Institute, the Second Circuit concluded that the First Amendment does not permit a public official who utilizes a social media account for official purposes to exclude individuals because the official disagrees with that person’s views. The Court reached this decision by finding that the “interactive space” provided by a government Twitter account is a public forum and, as such, exclusion from that space based on the individual’s disagreement with official’s statements constitutes unconstitutional viewpoint discrimination.

The big takeaway: yes, President Trump violated the First Amendment by blocking individuals from his @realDonaldTrump Twitter account. But does that mean that any public official who blocks users from their social media account for disagreeing with certain viewpoints is violating the First Amendment?

Not necessarily. While certain aspects of the Second Circuit’s decision apply generally to any public official who operates a social medial account, some features are only applicable to the President and, more precisely, the way this particular president operates his Twitter account.

Jumping Tweet-First into a Public Arena
First, it is important to keep in mind that not every social media account operated by a public official is a government account. Some accounts may be private or used only for discussion unrelated to that official’s public role. If it’s unclear whether an account is an official government account, the Second Circuit describes several factors which can be used to determine whether First Amendment issues will be triggered, including:

Although the Court doesn’t evaluate these factors in reaching its conclusion here, it’s helpful to use the @realDonaldTrump account as an example.

For the first factor, while the government argued that this account is private, personal account separate from the official @POTUS account, Trump and many members of his administration have described the @realDonaldTrump account as an official means of communication for the President. The account’s appearance makes it seem to be an official, state-run account that belongs to, and is operated by, the President. For instance, the header photographs show Trump engaged in the performance of his official presidential duties and the account is registered to Donald J. Trump as “45th President of the United States of America.” Additionally, Trump has made several important announcements from the account which have been characterized by the President and his aides as official statements. If this were truly a personal account that was held out to be completely separate from Trump’s official capacity as President, First Amendment concerns would not be implicated.

As to the second factor, the @realDonaldTrump account is notable not only for the tweets from Trump and his social media team, but also because the tweets and comment sections are open, without restriction, to the public at large. In this way, the account serves as an instrumentality of communication for the general public due to the interactive space it provides. Trump’s 62 million followers have the opportunity to comment both on Trump’s tweets and on the comments of other users, thus creating a forum for public discussion about the President’s statements and actions. Because the account is held open for the public, individuals cannot be blocked from participating in the discussion based on their views.

So, what does this mean for public officials who aren’t the President? Based on other recent decisions, public officials will encounter the same First Amendment issues even if their social media accounts are significantly smaller than Trump’s. For instance, the Fourth Circuit affirmed a district court’s decision that the Chair of the Loudoun County, Virginia, Board of Supervisors violated the First Amendment rights of one of her constituents when she blocked him from her “governmental official” Facebook page—which constituted a public forum—for criticizing the Chair and the Board of Supervisors. Similarly, the Fifth Circuit found that a constituent from Hunt County, Texas sufficiently pleaded viewpoint discrimination under the First Amendment when she sued the Hunt County Sheriff’s Office for blocking her from its official government Facebook page after criticizing the Sheriff’s Office.

As for the Second Circuit’s decision, the Court noted that a determination with respect to any First Amendment implications involving social media accounts operated by other public officials will require a fact-specific inquiry based on the factors listed above. The first such inquiry might involve the Twitter account run by Alexandria Ocasio-Cortez, who was recently sued by two separate individuals who were blocked from her account after allegedly criticizing her and her political views. The plaintiffs cite the Second Circuit’s ruling to argue that Ocasio-Cortez violated their First Amendment rights when they were blocked from her account.

This won’t be the last time an individual sues a public official over their social media use. Going forward, public officials will need to be mindful of other users’ First Amendment rights in their online interactions. For those in positions of power within our government, a simple click of the “Block” button could result in a violation of the First Amendment.

The “Commander-in-Tweet” and the First Amendment