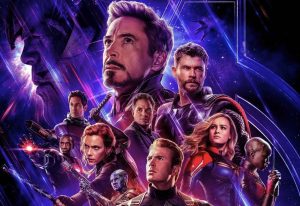 Perhaps one of the most mesmerizing scenes in Avengers: Endgame is where all the MCU superheroes (including those on Titan) come through Dr. Strange’s portals to enter the battle against Thanos. In Avengers: Infinity War, Dr. Strange didn’t use these portals to send Iron Man and the others on Titan back to Earth before everyone got dusted, but that alternative storyline certainly may have been one that fans would have enjoyed. Understandably, one enormous limiting factor to alternative storylines is cost—especially when $600-800 million was spent to create the two movies as they are. Future advances in artificial intelligence technologies may change that. Indeed, a number of large tech companies are already interested in creating interactive content to personalize storytelling (e.g., Black Mirror’s “Bandersnatch” episode), and recent developments in machine learning algorithms (including those fueling the creation of photorealistic images) may bring us closer to that reality sooner than later. If so, under what circumstances will companies own and get to collect on the copyright?

As discussed in an earlier blog post, computer-generated movies and series created without any human guidance would most likely be excluded from copyright protection under current copyright law. In fact, the Copyright Office has issued guidance clarifying that “a work of ‘authorship’ … must be created by a human being.” The copyright protection exclusion, however, may not apply to AI-generated work in which a human provided the creative intervention from which the work was produced. In other words, the question of whether a copyright may be issued for an AI-generated work depends on whether the work involved human authorship using a machine as a tool or whether the machine “conceived” the creative elements of authorship in the work.

For example, if humans provide details for significant events of a story (e.g., critical plot points, plot endings, etc.) and other input to guide the automated creation of alternative sub-plots or ordering of events in the story, one could imagine how a court may credit human authorship for the story. Likewise, independent of whether the story is copyrightable, human authorship may be credited for AI-generated videos in which humans provided a combination of parameters to guide the creation of the videos if the parameter combination itself is deemed to be a creative intervention.

Thus, at least for now, companies can employ a number of strategies to extend copyright protection to AI‑generated work. Given, however, how AI systems can already be used to create photorealistic images of people, places, and things or recreate videos with different-looking characters, scenes, and audio, it’s not difficult to imagine a world in the near future in which AI-generated work produced without any human creative intervention begins to compete directly with traditional, copyrighted work. Unless our laws change to account for such a future before it happens, this may be another case of the law trying to keep pace with evolving technology.

Deepfake News: While Technology Sprints, the Law Slowly Creeps Along