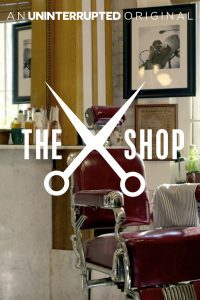 Let’s talk shop. With LeBron James. Sounds cool right? That’s what James and his partner Maverick Carter thought when their entertainment company Uninterrupted developed The Shop. On The Shop, James and his friends, business associates, and various celebrity figures banter while getting their hair cut. Uninterrupted aired two episodes of the series with the first episode, (which premiered during the 2017 NBA Finals), garnering roughly four million views across Uninterrupted.com and ESPN’s YouTube channel.

Then, in early April, the University of Alabama released a trailer for Shop Talk, with Alabama alumnus Julio Jones talking informally about football and life with Nick Saban and other football players in—you guessed it—a barbershop. Reportedly, someone told James about Shop Talk as he was exiting the court after a basketball game and he was none too pleased. Uninterrupted soon sent Alabama a notice of infringement both alleging intellectual property infringement, but also suggesting the parties discuss the matter before the lawyers make everything, you know, ugly.

As for the likelihood of confusion, just how similar are the two programs? Starting with the obvious—there is a significant similarity between the titles of the two series. Originally, Alabama’s Shop Talk overlapped with the title for Uninterrupted’s The Shop. In The Shop and the first episode of Shop Talk, both shows use all caps in the show title/logo. Both use the word “shop” in a short, two-word expression. (Alabama’s title also references Bama Football, the show’s commencement in 2018, and adds a red A.) The graphics and logos for the shows bear additional similarities. Both shows use a pair of open scissors to separate the capitalized show title. In The Shop, the scissors point up, but in Shop Talk, the scissors point down. During The Shop, the same graphic appears in the corner. But in Shop Talk, the graphic, even in the first episode that appeared in the corner read “Bama Cuts,” in caps, still separated by scissors with the red A.

Since James sent the notice of infringement, perhaps as an acknowledgement of the obvious overlap in title and perhaps to appease Uninterrupted, Shop Talk changed the show’s name to Bama Cuts. This simple remedial measure is likely to undercut Uninterrupted’s best trademark infringement argument, though other arguments remain. Prior to the name change, it seems likely that customers aware of the existence of one show could confuse it with the other. After the name change, it is less likely. Although the graphics remain similar, the distinct show names likely reduces the incidence of public confusion.

To have a viable claim for copying a reality TV show idea, the claimant must show the offending party had a reasonable opportunity to view or copy the work and that the purported copy is substantially similar to the infringed work. (Besides registering their work for copyright protection, filing their treatment with the Writers Guild of America and registering a format with the Format Recognition and Protection Association may also help protect a reality TV show idea.) In a press conference, Nick Saban, one of the forces behind Shop Talk, denied ever seeing or hearing about The Shop, but given the wide success of Uninterrupted and its first airing during the NBA finals, it is possible someone in Shop Talk’s creative chain was exposed to the show.

The substantially similar element includes an analysis of the similarity of protectable elements in the two works. Here, there are numerous similarities between the two shows, but many are too common to be protectable. For instance, though both shows are based on men talking in barbershops, Hollywood has explored the dynamics of men bantering in barbershops for thirty years. From comical scenes in Coming to America to entire movies devoted to the theme, like Barbershop, its two sequels and a TV series by the same name, the barbershop setting and men sitting around in the shop discussing personal and newsy items is not likely protectable.

So while Uninterrupted cannot legitimately claim ownership of the concept of men in a barbershop catching up on their personal lives and talking about current events, Uninterrupted could, however, have a viable claim if Shop Talk too closely mimics the way The Shop presents this barbershop setting. Under copyright law, the execution or expression of even a common idea can gain copyright protection. Consider for example, a singing competition like American Idol. By now, a singing competition with three judges constitutes a common idea. But a singing competition with three judges as coaches who pick their teams without seeing the contestants until they have heard their voices? That adds additional elements that makes a program like The Voice unique and protectable. If Uninterrupted can demonstrate that Shop Talk mimics certain similarly unique qualities of The Shop, Alabama may have engaged in infringement. Here, Uninterrupted might argue that using pro athletes in a barbershop setting and having the men engage in unscripted conversations are new and unique elements. In response, Alabama might contend that The Shop’s barbershop depiction is not unique and to the extent it is, Shop Talk further transformed the concept by employing different pro athletes and adding other new elements such as celebrity coach Nick Saban. There are reasonable arguments on both sides, and likely the claim is strong enough to survive a motion to dismiss.