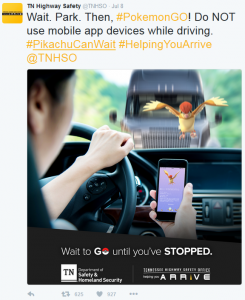 As we previously discussed, terms of service (TOS) for such an app may likely shield the company from player-originated legal action. Pokémon Go’s TOS, for example, requires players to agree that their use of the app is at their own risk, that they will not violate (or encourage/enable any other individual to violate) applicable law, rule or regulation, and that they will not “engage in any activity that may result in injury, death, property damage, and/or liability of any kind.” As such, these or other terms may prevent players who fall off their skateboards, crash their cars, or get sunburned in their quest to catch ’em all from being successful in court with respect to such injuries or damages.

Nevertheless, even if the TOS is robust, the company may remain liable to claims by others who are inadvertently harmed by the player’s actions. The advisory notice shown at the top of this article by the Tennessee Highway Safety Office (with its convincing Photoshop) illustrates such a scenario. Despite the game having a speed-based feature that discourages a player from driving to hatch Pokémon eggs by preventing a player from accruing credit for distance-based hatching when the player is traveling more than 20 miles per hour, there does not appear to be a similar speed-based feature that discourages players from catching Pokémon or collecting items from PokéStops while driving. Thus, additional features could be added to prevent potential lawsuits by others who are inadvertently harmed by the player’s actions on the grounds of negligence or other legal basis.

For example, parents of a girl killed by an Uber driver in a car accident sued Uber in 2014, alleging that Uber was negligent in developing and implementing its software, which would cause its drivers to be distracted or inattentive while driving. Specifically, the parents alleged that the driver’s need to monitor the Uber app (e.g., to accept ride requests) created a distraction for the driver while driving and was a substantial factor for their daughter’s death. Moreover, a victim of a different car accident sued Snapchat earlier this year for distraction-related negligence. In particular, this lawsuit alleged that Snapchat knew its users might use its “smart filter” service (which allows users to overlay their traveling speed on top of an image) in a manner that might distract them while driving and that the driver was distracted when she used the “smart filter” service to post a photo of herself going fast, which resulted in a collision between the driver and the victim’s vehicles that caused the victim’s severe injuries. Although these suits were or have not been decided on the merits, it is best to avoid opening up the possibility of liability.

When playing the game in public, one hopes that Pokémon Go players will exercise common sense and caution, for example, to avoid incidents like the one shown above. But when there are lapses of judgment, legal issues (like Pokémon in the game) appear where you least expect them.