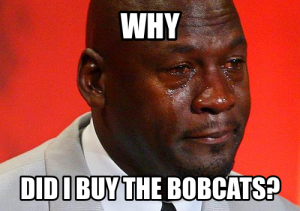 Almost everyone (even my parents) has seen the Crying Michael Jordan meme popping up around the internet and social media. Crying Jordan has appeared in the standard meme form of photoshopped images and gifs but has also inspired Halloween masks and even customized Air Jordan sneakers. TMZ reports that Jordan doesn’t have a problem with it, as long as no one uses it to “promote their commercial interests.” But what if he changed his mind or someone started using it for commercial gain? Could Jordan protect himself against “unauthorized memeing”?

Any attempt to control or otherwise affect the use of memes can bring with it myriad legal issues, including the First Amendment, copyrights, trademarks, privacy and publicity rights, defamation, and false light. Memes may also have different implications for private individuals as opposed to public figures. The variety of issues involved could give Jordan several legal weapons against the publishers of his tearful likeness on the web.

Two private individuals have at least partially succeeded against the spread of unflattering memes using traditional tort mechanisms. A jury awarded a special-needs child in Tennessee $150,000 for defamation and false light claims arising out of a meme that mocked him. In Australia, a teenager successfully sued three media outlets for posting memes parodying his mullet. However, Jordan might have a harder time succeeding on the same claims. For example, in connection with a false light claim, Jordan would not only have to prove that the memes conveyed an actual falsehood that the audience may have believed, but he would face an even higher burden as a public figure pursuing the same claims. Jordan would have to show that memes were published with a reckless disregard for the truth or knowing false statements, also known as “actual malice.” Against that burden, the First Amendment protections for parody and satire would likely prevail. It’s unlikely that many viewers would actually believe that the Crying Jordan meme really shows him in tears over his decision to buy the Charlotte Bobcats (reportedly the original version of the Crying Jordan) or that its publisher acted with the required level of malice.

Others have used copyrights against the spread of memes. Getty Images curtailed several internet users from posting their own “Socially Awkward Penguin” memes with demand letters. Similarly, the “Grumpy Cat” owner sued over the use of its images on coffee merchandise. In both situations, the meme publisher would likely raise the fair use defense, which is based on several factors including the degree of transformation from the original work, the purpose of the meme, and whether the meme harms the market value of the copyrighted work. In Jordan’s case, the copyright is owned by the Associated Press, so in reality, he would have no rights to assert such a claim. Hypothetically, even if Jordan owned the copyright, the fair use defense would likely prevail for memes using his likeness. Copyright law generally allows for the type of creative modifications to original works that memes exemplify. Strong protections for parody and satire also exist in copyright law, even where used commercially.

Besides the legal implications, it’s possible that the biggest hurdle to stopping the spread of a meme is enforceability, forcing rights enforcers to play a never-ending game of “Whack a Meme.” Just as the internet has made it difficult to stop media piracy, it will ultimately prove difficult to keep oneself from becoming a meme if the internet gods deem it so. For every one Crying Michael Jordan taken down, two could pop up in its place. Perhaps the best thing to do is embrace the notoriety like Justice Ruth Bader Ginsberg (AKA Notorious RBG), and just buy meme merchandise with your likeness to give to your friends.