At the recent Apple iPhone unveiling event, we learned that you can Peek at it with a light press on your iPhone screen and Pop into it by pressing a little deeper. And just like that, Apple unleashed a new namespace of gestures distinguished by different amounts of force applied by the users. Developers will soon create 3D input gestures characterized both by where a user’s finger moves on screen and by how hard the user presses. For instance, you might scroll faster through your contact list based on how hard you press while drawing your finger across the screen, or control the speed of your virtual racecar based on the amount of force you apply. If history is any guide, expect savvy businesses to lay claim to the 3D gesture space with intellectual property.

Gestures have long been the subject of patents. In the 1990s, Palm handhelds had “graffiti” software that enabled Palm users to input text by using a pointer device to draw letters on the screen with simplified strokes. Xerox took issue with this and sued Palm for allegedly infringing Xerox’s patent on its Unistroke handwriting-recognition software. (See Fig. 1 of the asserted patent below.) Although Xerox’s patent wasn’t the first gesture patent, the lawsuit illustrated the business value of obtaining patents on gesture-related innovations. 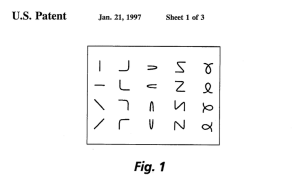 This patenting strategy continues and has seen explosive growth in recent years. To date this year, the U.S. Patent and Trademark Office has issued about 800 patents with claims describing gestures. The new iPhone’s pressure-sensitive display will likely compound this growth.

U.S. Patents Issued per Year with a Claim to Gestures 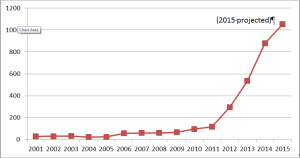 To be sure, gesture-related patents tend not to cover the gesture itself, disembodied from a computer. No one will own an improvement on the thumbs up sign any time soon. Rather, gesture patents tend to cover the software and hardware that detects or responds to particular gestures.

Patents not only help tech innovators protect their gesture-related inventions from copycats, they can also be a significant business asset. As gestures become more distinct and expressive with more dimensions, they can also become part of a company’s brand (e.g., swiping left-or-right in Tinder, the act of speaking the name “Siri” to iOS, the Konami code). Gesture-related patents can offer a layer of protection to companies innovating in the realm of human-computer interaction.