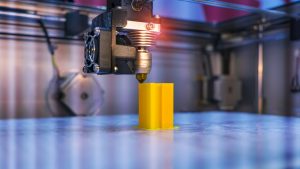 As the world collectively struggles to adapt to the “new normal,” it is clear that one of many challenges facing businesses and individuals is how to best adapt to supply chain disruptions. A key example of where these shortages are being reported is in the health care sector, which is experiencing a limited (or non-existent) supply of personal protective equipment (PPE) for health care workers and ventilators for patients. Not only have these shortages placed a strain on those treating patients who have fallen ill from COVID-19, but it has also frustrated efforts to fully identify who may or may not be infected. As one example, in a recent interview conducted by The Indicator podcast, it was reported that limited supplies of PPE to protect workers during patient sample collections were in turn limiting the ability of the University of Washington’s health center to test patients for coronavirus.

The current situation seems dire, but it is not without hope. In response to reports like these, calls to action have been echoing through the internet. These calls have been met, in part, by those with 3D printers. Like the name suggests, a 3D printer is a machine that makes a three-dimensional solid object from a digital file using an additive process. (The printer creates the object by building up successive layers of material.) While 3D printing has many benefits, it is commonly associated with rapid prototyping or custom small-scale manufacturing, but the current crisis has highlighted another potential of 3D printers—distributed crowdsourced manufacturing.

It has been reported that a company in Italy named Isinnova was able to 3D print unofficial replacement valves for a CPAP system used to treat coronavirus patients when the original manufacturer of the system was unable to meet increased demands for the part. When demand began to exceed Isinnova’s capacity as well, it distributed its digital part file to another company with 3D printers to increase production. Isinnova has also begun to share, free of charge for non-commercial purposes, a digital part file it created for an adapter that can be 3D printed to turn snorkeling mask into a non-invasive ventilator. In another story of a crowdsourcing win, it has been reported that a New York couple who make and sell custom 3D printers in their home, have being using their 3D printers to make protective face shields for testing clinics. Such distributed manufacturing efforts are not limited to just those with 3D printers, other feel good stories involve seamstresses and clothing manufacturers sharing patterns online and stepping up to make cloth masks.

Of course, this wouldn’t be a legal blog if I didn’t mention that those who are 3D printing parts designed by another run the risk of claims of intellectual property infringement (for example, if the parts were protected by copyright or patents) and thus should proceed with caution. On the other hand, those who find their parts being 3D printed by others must also carefully weigh how to best proceed—especially in times like these where, due to public health and safety concerns, a claim of infringement might result in negative public relations. For example, a U.S. patent holder would need to consider whether they could potentially face an equitable estoppel defense based on the patent holder’s actions, statements, or lack thereof, should the patent holder later decide to bring an infringement claim against the 3D printer, and balance that consideration against how enforcement actions could be received in the context of public perception. With respect to Isinnova, the valve part that they 3D printed is reported to be covered by a patent owned by the original manufacturer Intersurgical. And while it was initially reported that Intersurgical had threatened to sue Isinnova for patent infringement, Intersurgical released a statement clarifying that it had not threatened to sue anyone. Perhaps a creative licensing arrangement could help protect the patent owner and still provide society with the benefits of the 3D printer technology during this hopefully limited time of crisis.

It’ll be interesting to see what other ways people will use 3D printing to overcome these current shortages. It’ll be even more interesting to see what ways companies may implement distributed 3D printing back-up plans for future surges in demand or supply chain disruptions. Finally, it remains to be seen whether the U.S. government will intervene with respect to increasing the supply of patented and/or copyrighted technology related to the treatment of coronavirus patients, such as has been seen in other countries. In the meantime, stay safe and healthy out there.

The Internet Stole My Face: New Advances in Technology Could Make Everyone a Digital Video Puppet