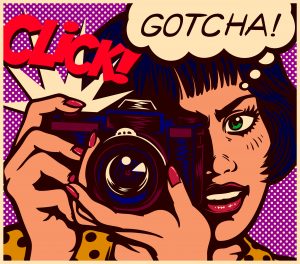 In a recent social gathering, your friends took a number of photos and circulated it to the group. You see that one shot by a friend is a particularly great photo of you. You repost to your social media account to share with the world. It would generally be safe to assume that nothing will come of this, much less a copyright infringement lawsuit against you by your friend who took the shot. For celebrities, this is not always the case. In the past few years, there have been many lawsuits filed for copyright infringement by photographers and paparazzi against celebrities that reposted photos of themselves that they took off the internet.

From performers like JLo, Katy Perry and Justin Bieber to models like Gigi Hadid and Emily Ratajkowski to athletes like Odell Beckham Jr., LeBron James and Deshaun Watson, all have received demands and lawsuits based on copyright infringement to pay up after reposting such photos without permission. While many have quickly settled, others have chosen to fight back based on the particular facts of each case.

Model Behavior
In Emily Ratajkowski’s case, there is a motion for summary judgment pending in the Southern District of New York in which her attorneys present a number of arguments, including that the paparazzi photographer, Robert O’Neil, does not have valid rights to a copyright and that Ratajkowski’s Instagram post constitutes fair use. Fair use looks to four statutory factors: (1) the purpose and character of the use, including whether such use is of a commercial nature or is for nonprofit educational purposes; (2) the nature of the original work; (3) the amount and substantiality of the portion of the original work used in relation to the original work as a whole; and (4) the effect of the use upon the potential market for or value of the copyrighted work. Ratajkowski added the words “MOOD FOREVER” at the bottom of a photograph of her with a vase of flowers that she bought for a friend. As to the first factor, her attorneys argue that by including these words, the purpose and character of the use was entirely transformed and makes commentary and criticism of “Ms. Ratajkowki’s perspective of abusive, aggressive, and harassing practice of paparazzi constantly following her, even when buying flowers for a friend.”

The King’s Court
In LeBron James’ case, a Florida photographer, Steven Mitchell, filed suit for copyright infringement in the Southern District of New York after the athlete reposted, without permission, a photo that Mitchell had taken of James dunking. The athlete filed counterclaims alleging violations of his state (Cal. Civ. Code § 3344) and common law rights of publicity because Mitchell allegedly used and exploited James’ image, likeness and identity to his commercial advantage without James’ consent. James also successfully transferred the case to the Central District of California, where it is currently pending.

On the Receiving End
In Odell Beckham Jr.’s case, the athlete went on the offensive and filed a complaint in the Eastern District of Louisiana for declaratory relief that he had not infringed any copyrights and damages against Splash News & Picture Agency LLC after the agency demanded that Beckham Jr. pay for reposting without permission a photo of himself on Instagram that was taken by paparazzi and licensed to Splash. In the complaint, Beckham Jr. sought declaratory relief against Splash for its “pervasive and coercive practice of photographing celebrities without their knowledge, selling those celebrity photographs to gossip websites and publications for profit, and then demanding payment from the celebrity for purported copyright infringement.” Because the photo at issue captured Beckham Jr.’s ankle injury through a privacy fence with the use of a telescopic lens, the athlete claimed a number of state law torts, including that of intrusion on solitude, public disclosure of private facts and appropriation of likeness. The case settled approximately a year later.

What are the lessons learned? At least for celebrities, reposting without permission photos taken by another—even those of oneself—may lead to costly litigation. As the cases above show, the specific facts of some cases may provide reasonable grounds to fight such copyright infringement allegations. However, these cases have either settled out of court or remain pending. Absent a judgment on the merits, perhaps the most economical way to use such photos is to simply seek permission to repost.

The Internet Stole My Face: New Advances in Technology Could Make Everyone a Digital Video Puppet

Whack a Meme: Is It Possible to Contain (Let Alone Stop) the “Crying Jordan”?

Face Value: An Allegedly Co-Opted Photograph Turns into a $2.2 Billion Headache for Chipotle