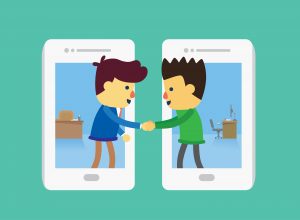 Social media is quickly becoming the way that companies present and market themselves to the world. Companies are also realizing the value social media provides in an easy conduit to communicate with customers. But the same qualities that make social media valuable can also lead to negative consequences. While information can be shared easily and instantaneously through social media, retracting such information is another story. Furthermore, the audience is not easily limited. So when it comes to the context of mergers and acquisitions, should social media have a role?

Social Media Has Become a Key Business Asset.
94% of all businesses with a marketing department use social media as part of their marketing platform. A company’s social media presence allows both customers and competitors to see the personality of an organization, its values and beliefs, and the way it conducts its business. Forward-thinking companies both recognize and utilize social media as a valuable tool in the creation and maintenance of brand image. Also, due to its ever-increasing impact, social media has begun to play a large role in the due diligence phase of M&A transactions. In fact, social media has increasingly been used to identify target companies for potential acquirers. In a 2013 survey by Deloitte, more than half of corporate development executives used social media for target identification.

The above being said, however, there are two obvious challenges introduced by social media in the context of mergers and acquisitions:

→ urging investors to read the relevant documents containing important information filed or to be filed with the SEC;

→ explaining that investors can obtain those documents for free from the SEC; and

→ describing which of those documents can be obtained from the (statement making) company free of charge.

In the case of social media sites like Twitter that place character limits on posts, the SEC permits companies to use a hyperlink that will take the reader to a separate page containing the required legend so long as there is language around the hyperlink that alerts the reader that the hyperlink contains important information.

Still, confidentiality- and compliance-related potential pitfalls aside, there are real benefits to using social media post-merger or acquisition:

All this considered, the answer to whether social media should have a role in mergers and acquisitions all depends on timing. Early and midway through the process, undisciplined or unmonitored social media accounts and activity can cause a company substantial headaches. So at these stages, the role of social media is one of measured restraint. But once the transaction is completed? That’s when the “social” in social media can help ensure all the work that has gone into creating a new business entity doesn’t go to waste.