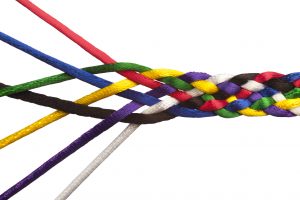 Earlier this year, Ethereum co-founder Vitalik Buterin, in cooperation with economist Glen Meyl and researcher Puja Ohlhaver, published a research paper on soulbound tokens (SBTs). SBTs are publicly visible, non-transferrable (but possibly revocable by the issuer) digital assets representing “commitments, credentials, and affiliations.” Buterin et al. have said that such tokens would be like an “extended résumé” while others have said SBTs will enable protocols such as Ethereum to “encode social relationships of trust.” The ultimate use of SBTs would be to allow Ethereum to create a Decentralized Society (DeSoc), a concept that the authors define in their paper through the exploration of use cases and how those would enable a digital social ecosystem. At highest level, the DeSoc described in this paper is a bottom-up coordination between participants to build, participate and govern plural network goods. (An example of a plural network good is access to property that would otherwise be private.)

Most mainstream reporting on blockchain technology has recently focused mainly on financial applications of digital coins and tokens, including the use of such digital assets as a currency, a security and a highly speculative means for obtaining instant wealth. However, this focus on financial applications largely ignores the interesting societal impacts that such digital assets can have—including how tokens can serve as the building blocks for social interactions, communities and networks.

In their paper, Buterin et al. propose several use cases of SBTs that stray away from this hyper-financialization and toward other digital assets that focus on building DeSoc. SBTs are an emerging type of digital asset that may be used by individuals and companies hoping to be a part of and interact with others in DeSoc, including virtual worlds collectively referred to as the metaverse. The discussed applications include SBTs representing memberships, loyalty programs, norms of identification, specific résumé elements such as credentials and certifications, event attendance, and more. SBTs also enable our digital identities to be protected from imitators such as identity thieves and deepfakes.

Reduced Risk in Digital Assets
In order to directly address the hyper-financialization concern, one of the key attributes of SBTs is that they are not transferrable. The non-transferability of SBTs disables participants’ ability to sell these tokens, eliminating the opportunity for participants to speculate on them.

Non-transferability also eliminates the opportunities for speculative high-risk digital asset lending, such as where crypto-lending firms borrow crypto assets from customers and then lend those same assets to crypto hedge funds where the lender has little to no equity in the loans.

General Uses for SBTs: Identification, Inclusivity and Intent
Buterin et al., among others, have suggested a variety of uses for SBTs primarily geared towards creating DeSoc while others have admittedly been more geared towards using SBTs as a store or reflection of value.

The most obvious and foundational use of SBTs in creating DeSoc is some form of identification. Take a “traditional” meeting for example, where you could verify the person’s identity by seeing them or hearing them. Of course, in some meetings, confirming the identities of the people involved can have implications, including privacy considerations. Conversely, in a “modern” meeting that uses avatars or some other digital representation of the participants, verifying the identity of those in the meeting has similar implications as a “traditional” meeting, but creates additional challenges that could potentially be solved by identification SBTs. The utility beyond meetings of a non-fungible identification SBT for verifying a person’s identification, whether it’s DeSoc in the physical or virtual world, is not hard to imagine. Further, in virtual worlds, these identification SBTs may help keep individuals accountable for their behavior by serving as credentials and a means to associate behavior with an identity—accountability of course being requisite to a functioning society in general.

Furthermore, SBTs can also be used, as mentioned above, to validate someone’s membership to a certain club, group or otherwise. Up until now, many digital asset-orientated clubs have welcomed members in and provided benefits to these members, such as being able to attend exclusive events, based on their ownership of the relevant club NFT. However, often most of those who hold such an NFT are those who can afford one, which can cost hundreds of thousands if not millions of dollars at their peak popularity. This dynamic results in environments that are exclusive rather than inclusive, which seems contrary to one of the major tenants of the digital asset sector—democratization. The plural property concept enabled by SBTs and discussed by Buterin et al. is another interesting application of SBTs.

SBTs may also be used to enable businesses to confirm the intentions and genuine competencies of job candidates based on conference attendances, certifications and credentials usually in the form of an NFT. For example, if a web3 entrepreneur is hiring software developers, they may ask them what web3 events they have attended to judge their interest in the space. With fungible badges, a candidate could simply purchase a conference badge from someone who attended a qualifying conference (e.g., Bitcoin 2022) rather than actually attend—thereby making it difficult to validate actual experience. However, conference badge NFTs that are SBTs are not transferrable, so if the candidate provided you with an SBT, you could be assured they attended that conference.

As another use case example, Buterin et al. discuss how an artist could issue NFTs from their “Soul” (at its most basic level, a collection of SBTs) to validate a piece of their art, much like an artist’s signature on a physical painting. Such validation may also help maintain or one day increase the value of NFT art, as it allows for the transferable NFT to be bound with a non-transferable SBT that cannot be separated and sold separately from the NFT.

Another proprietary application of SBTs and example of non-transferrable but revocable SBTs is SBT uncollateralized lending, whereby an SBT representing a line of credit or loan is posted on someone’s Soul, which includes all of an individual’s SBTs and where the issuance is dependent upon an individual’s “constellation of SBTs […] that may be sufficient for a Soul to take a loan.”

SBT Challenges: Privacy and Playing Fair
Buterin et al. focus on two major challenges to using SBTs to construct DeSoc: a potential lack of privacy and the opportunity for cheating.

First, if each Soul’s SBTs are publicly linked, one or more SBTs may disqualify or somehow tarnish the reputation of other SBTs within a Soul. For example, if someone’s political-related SBTs were linked to someone’s professional-related SBTs, you could imagine a scenario where someone would not want their political affiliations, beliefs or even voting decisions known to their colleagues. Buterin et al. propose everyone can have individual, separate Soul’s related to their family, health care, profession and politics, to name a few, or store some SBTs off-chain where they are not publicly available nor visible to all.

Second, much like how both traditional organizational structures (centralized and usually hierarchal) and decentralized autonomous organizations (DAOs) are susceptible to bribes from individuals or other entities attempting to compromise these organization’s decisions for personal gain, SBTs can also be obtained through bribes and used to cheat the system (e.g., going back to the conference badge example, it would still be possible for someone to obtain an SBT by bribing an unscrupulous conference organizer). In other words, the process of acquiring an SBT is still vulnerable to cheating and fraud.

Overall, SBTs are a step away from the hyper-financialization of digital assets in recent years and move the vision of what a digital asset can be toward delivering on promises to democratize access to products, services and profits from individual’s creativity or skill. Currently, it appears that the most likely initial adoption of SBTs will be as forms of identification or other non-transferrable, stable representations of individuals both in the physical and virtual world with the aim to build increasingly decentralized organizations, communities or societies. However, SBTs applications aren’t limited to these uses—they may also provide for less-risky proprietary alternatives to services such as crypto lending and trading. While challenges of technical implementation and adaptation remain, it will be interesting to see which business or government finds a worthwhile application for this emerging digital asset.

Land of the NFT: Use Cases in Real Estate

Protecting Your Digital Identity in the Metaverse