A contentious battle over Internet anti-piracy legislation shifted from Washington to the Consumer Electronics Show, The Washington Post reported. The Consumer Electronics Association, which is behind the show, has been a vocal opponent of the two bills circulating in Congress that would help Hollywood titans, record labels and pharmaceutical firms enforce copyright infringement laws online.

In fact, a study released yesterday from Juniper Research predicts that the amount of money being spent on virtual currency in mobile apps is going to more than double in the next four years, going from $2.1bn last year to $4.8bn by 2016.

Domino’s Pizza, which has already been testing the waters of mobile marketing for some time now, has started a new campaign that includes the use of augmented reality, to add a whole new dimension to its latest 555 pizza offer.

Augmented reality has made progress on smartphones, with apps letting people layer information and graphics over a view of the real world. A startup from the Seattle region is looking to take the next step toward an AR future with special contact lenses that make it possible to view objects projected onto glasses a short distance away from the eye.

A new video game has gotten its hooks into Brian Kealer, a 26-year-old San Francisco software engineer. He’s not killing birds or using his vocabulary to impress his friends. No, Kealer is after real prizes, like the iPad2 he just scored. And he’s playing with his bank account.

A great video by Socialnomics on where social media is and where its going.

Many people invest significant time, effort and in some cases real money to acquire virtual goods. There is great perceived value in these virtual goods. But there are a growing number of cases, where users have been the subject of hacking and other situations where they have had their virtual property stolen. See for example our prior blog entry on a massive theft of 400 billion poker chips from Zynga users.

Most game and virtual world operators try to shield themselves from claims of loss by their users through effective legal strategies embodied in their terms of service. In most cases, users are only granted a license to use the virtual goods, but they do not own them and the terms often make clear that there is no independent value to goods. Additional disclaimers and liability avoidance language may also be included. Yet, this has not stopped some users from suing for the loss of the perceived value of their virtual goods.

Given these potential claims, what else can companies do to protect themselves from such risks? Apparently, this risk may now be insurable – at least in China – thanks to a collaboration between Sunshine Insurance Group and Gamebar.  According to a report, by China Daily a Sunshine Insurance spokesperson said “The insurance will help to reduce operating risks for online games
companies as the companies which purchase the insurance will be covered
to compensate customers in the event of lost or stolen property.”

It will be interesting to see if that catches on in the US and elsewhere, and if so, what will be covered and what will not. Check back for updates.

The preferred online tournament provider for featured console game releases sold in U.S.
GameStop locations and through GameStop.com. GameStop will offer publisher partners unique, large-scale online tournaments to help market, sell and create deep player engagement for their games. GameStop customers will have the opportunity to win cash and incredible prize packages through the GameStop/Virgin Gaming tournaments, in addition to Virgin Gaming credits redeemable for games and other merchandise.

As online gaming continues to grow, companies are seeking various ways to create ancillary revenue and drive user engagement. Tournaments can be one way of doing that. Tournaments, if done right, can be legal. However, there are a number of legal considerations of which companies must be aware to avoid running afoul of various laws.

Recently the controlling interest in Playtika Ltd., the Israeli social and casual game development company behind the Facebook games Slotomania and Farkle Pro, has reportedly been acquired by Caesars Entertainment Corporation for approximately $90 million USD.

Playtika was founded in late 2010 and since then has garnered around 9 million users.
Playtika’s games, Slotomania and Farkle Pro, are modeled after a slot machine and ancient dice game, respectively.  However, unlike Caesars Entertainment’s real life casino games, Slotomania and Farkle Pro are free to play with a “virtual currency” transaction option.
Caesars Entertainment has stated that “[w]e have made a strategic investment in Playtika and look forward to working with their strong,
experienced management team in developing free-to-play social games globally.”

From this, it would seem that Caesars Entertainment wants to build an online brand and obtain expertise in managing an online gaming property, possibly with an eye to creating synergy between its offline properties and its new online brand.  Additionally, this would likely serve Caesars Entertainment well if any of the current Federal or State-specific proposals to legalize online gambling are successful.

American Express today unveiled Serve, a digital payment
and commerce platform that gives consumers a new way to spend, send and
receive money with services that go beyond the existing global payment
networks. Some interesting points from the press release issued today include the following: 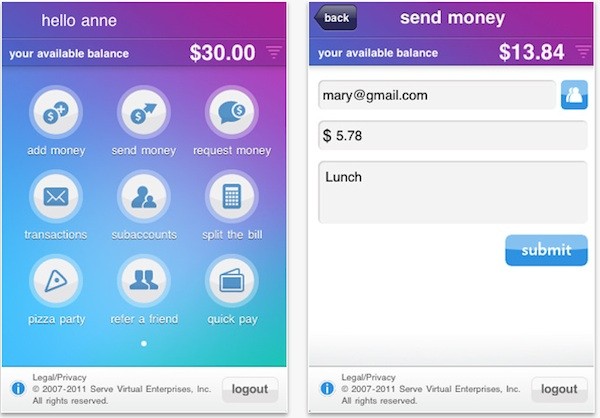 The following is an excerpt from the letter:

“I am disturbed by news that in-app purchases may be taking advantage of children’s lack of understanding when it comes to money and what it means to ‘buy’ an imaginary game piece on the Web.  Companies shouldn’t be able to use Smurfs and snowflakes and zoos as online ATMs pulling money from the pockets of unsuspecting parents.  The use of mobile apps will continue to escalate, which is why it is critical that more is done now to examine these practices. I will continue to closely monitor this issue and look forward to the FTC’s response.”

A UK court entered  a guilty plea against Ashley Mitchell, an IT guy who hacked into Zynga’s servers last year and stole 400 billion virtual poker chips. His efforts to resell them, which is against Zynga’s terms of service, netted him $86,000 and a yet to be determined jail sentence.

To avoid issues with the gambling laws, Zynga sells poker chips to users for real money (and in some cases to reward user actions), but prohibits any cash out or resale of the chips.

“Zynga owns, has licensed,
or otherwise has rights to use all of the content that appears in the Service or the Zynga games. Notwithstanding any provision to the contrary herein, you agree that you have no right or title in or to any content that appears in the Service, including without limitation the virtual goods or currency appearing or originating in any Zynga game, whether earned in a game or purchased from Zynga, or any other attributes associated with an Account or stored on the Service.

Zynga prohibits and does not recognize any purported transfers of virtual property effectuated outside of the Service, or the purported sale, gift or trade in the “real world” of anything that appears or originates in the Service, unless otherwise expressly authorized by Zynga in writing. Accordingly, you may not trade, sell or attempt to sell in-game items or currency for “real”
money, or exchange those items or currency for value of any kind outside of a game, without Zynga’s written permission. Any such transfer or attempted transfer is prohibited and void, and will subject your Account to termination.”

“The purchase of Zynga Poker
chips from a third party seller is a violation of Zynga’s Terms of Service. We are  not responsible for any losses incurred and will not restore chips.

The only safe method of purchasing our chips is directly through the application, via the Buy Chips tab.”

As virtual currencies proliferate, it is important for companies to ensure that they think through their business models, develop and enforce effective terms of service and consider up front how they can use technological measures to deal with people who inevitably will try to beat the system. This requires a careful integration of business, legal and technical strategy.

American Express has partnered with Zynga to allow American Express
Membership Rewards members to use their points to purchase goods in Zynga’s
games.

Membership Reward points are earned by using an American Express card for
purchases, as well as through various promotions such double points for
groceries or hotel stays.

Members will be able to use their points not only for
game cards and virtual currency, but also for exclusive virtual goods. For
example, a member can convert points to FarmVille cash or purchase an exclusive
FarmVille virtual good.

There has been much buzz about Zynga’s attempt to patent virtual currency. As is often the case with patents, there is much hype, many misconceptions and little focus on the actual facts. Here are the facts.

1. Zynga does not have a patent on virtual currency. It has applied for a patent, the application has been published but has not yet been examined. It will be some time, if ever, before a patent will issue. The published application is 2010-0227675. Here is a copy of the Zynga Application.

2. Zynga is seeking protection for various aspects of virtual currency, particularly in the context of “gambling” games. The following is an example of one of the claims:

4. The patent application was filed

5. We will monitor the status of this application as it is examined and any rejections are made.

While many believe that this patent application will be rejected due to prior art, the most important take always are these:

E-mail us for a free guide on patent and other IP strategies in the social game space.